Why are cabinet ministers wasting their time hanging outside the Bond Commission? Have they got nothing better to do? 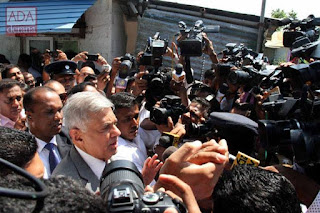 What are the ministers of Ranil Wickremasinghe’s party thinking to waste their time hanging around him to show support when he comes after giving evidence to the Bond Commission?

It was very creditable that PM Ranil Wickremasinghe went meekly to answer the questions put to him at the Bond Commission, as it never would have happened in an MR administration and perhaps the Commissioners would be incarcerated for the cheek of even asking.

However it was downright stupid for 20+ ministers of the UNP to show their support like a pack of dogs (rallata yanawa) behind a bitch, when they had better things to do.

Just imagine the public rightly or wrongly are in long petrol queues even though it may be a rumor, started by a mischief maker that there is a shortage, but nevertheless this has created a temporary shortage. In this scenario all our Elected Ministers are hanging around their boss for no reason at all.

The PM certainly does not want, did not ask, and is very embarrassed by all the attention anyway. SO why did you go? Just because one mentally deviant minister makes a suggestion to meet at the commission premises does not mean you have to go ahead. You just have to tell him, that PM ordered NOT to be present and his enthusiasm will stop in a second. It is because he is deviant that he could not think through what his boss is thinking.

He was judging the problem by his own limited thinking capacity, and thought the PM would like this attention, so he pushed everyone to go.

Just you wait for him to haul you over the coals for badgering the others to join you in a display of confidence when none was needed. It’s stupidity at its highest level. It is a sorry sight to further frustrate the public that the lawmakers are playing a game amongst themselves, when even rumors are sufficient to inconvenience the  public, they have lost so much faith in the system they are NOT willing to trust anyone, least of all the politicians.

Any story will now have traction, as no one will trust or believe anything that is issued officially, least of all assurance that all is well, means that all is NOT well. When we live in a schizophrenic country such as this where there is no reasoning, it is irrational behavior that is conquering all spaces.

NO wonder then that MR has such brand value even after the complete looting of the treasury by extremely ill judged investments and spending with no understanding of a return on investment, even if the return is political longevity! We have lost hope in the whole system. Bye Bye Sri Lanka’s future.
Posted by Patta Pal at 3:40 PM No comments:

MPs JUST GOT A Rs 12.5Million Pay Raise as a result of the Budget

The information we just received from the Motor Traders Association, was that the cost of a new Toyota Land Cruiser, the preferred choice of vehicle imported by the Sri Lankan MPs duty free, had gone up by a staggering Rs12.5Million.

As the MPs are entitled to a duty free permit at the highest level to import such vehicles, and then sell it on, this effectively means that the permit is now worth that much more!

IS IT FAIR I ASK? That these sort of games are played out in broad daylight, to fool the masses.

Surely when Minister Eran Wickremaratne, one of the more dedicated Ministers in Government, says that as MPs and Ministers are so badly paid, this permit should be treated as part of their compensation and so it is OK, we have a problem with his absurd thinking too, because he has joined the club and is no longer batting for the people who he has promised to serve and instead the club he has joined, just like all the other rogues.

We should get our priorities right. If we know that such a vehicle is now Rs50M new, and only MPs can get this duty free, then there is something wrong when only they are able to go about in these vehicles, showing their might and power, when they have resulted in the state earning Rs43Million LESS in duty by this means.

We must stop all duty reduced vehicles in Sri Lanka, so that the level playing field is created, so anyone can pay the full whack and buy vehicles if they so wish by paying the duty. It is the powerful Motor Manufacturers Association/Motor Traders Association, that is working hand in glove with the MPs and Ministers who stand to gain most from this duty free/duty reduced permits, as otherwise new vehicle sales would plummet.

It is therefore their pressure on their friends as they are all in the same cocktail parties eating and drinking who are protected, as there is a kind of back scratching going on with the MPs then being given a discount on the vehicles in addition to the duty concession, a kind of bribe or sweetener that passes the acid test as it cannot be proved. They could get free upgrades on the vehicle, free options, or the luxury package thrown in as part of the deal.

IT ALL SUCKS, and the poor citizen effectively ends up paying for this folly. If Eran does not think it is bad, then we have lost the plot in this country. LEAVE!
Posted by Patta Pal at 12:40 PM 1 comment:

The Petrol shortage was simply a result of a Fraud being “found out”. The blame lies at the top, and heads must roll, if corruption is to be STEMMED!

How ridiculous is the excuse, that a Tanker that brought fuel was “found to be carrying substandard fuel, and therefore had to be rejected!” This state of affairs just does not happen by accident. It is a fraud that was perpetrated against the Country and this was found out by a local person testing the fuel quality.

Any person with half a brain will know that NO COMPANY ships substandard petrol UNKNOWINGLY! It is so easy to test fuel, that even I can buy a digital sophisticated machine for US$5,000 and have all the tests carried out in minutes. No one will ship substandard fuel UNLESS that was the standard that was ordered, or to put it simply, someone ordered substandard fuel, paying the normal rate, and pocketing the difference overseas, between the normal fuel price and the substandard one. This has been going on for a long time, and this time someone sneaked the information about the substandard, so the Minister had NO OPTION but to reject it.

It is a bit rich when he says in today’s FT that he has been under a lot of pressure to accept this substandard fuel, BY POLITICIANS AND BUSINESSMEN, when it is the very same people who ordered it, so they could make a buck on the price difference, and like they have done before fool the public with low grade fuel that is a constant of our Fuel Distribution system.

Only when we have a consumer affairs authority with some teeth and the machinery available to mobile test fuel around the Country, so that this practice is brought to the public notice and those responsible, prosecuted and jailed, will there be some confidence that the PUBLIC INTEREST is being safeguarded.

Until then we citizens in Sri Lanka are held to ransom by rogue politicians who are making a buck at our expense, IN THE END THE POOR CONSUMER PAYS FOR EVERY FRAUD THAT OCCURS IN SRI LANKA, and corruption is the order of the day of the leaders in Government and the Public Service whose sole purpose in life is to profit from theft from the people.

With hundreds of thousands of people inconvenienced, thousands waiting in queues, the Country is losing productivity and production, and it does not have any effect on the leaders, being driven in their LUXURY SUV’s powered by Diesel. They don’t have a clue how our poor people are suffering. Let’s face it, the MAIN responsibility of the Minister of Petroleum is to ensure that correct quality fuel is distributed to all stations of the Ceypetco Brand.

He has not been able to ensure that, and so he MUST RESIGN WITHOUT DELAY, NOW
Posted by Patta Pal at 12:35 PM 4 comments:

Sri Lankan so called leaders, be they leaders of Business, Politics, Religion, or Education, love PONTIFICATING about how we should live. Well all this pontification has NOT done a drop of good since the beginning of time here in Sri Lanka, because their words don’t mean anything to the intended audience.

It is therefore best for all these people to shut up, stop getting on a pulpit, podium or platform, and instead do what they have been appointed, elected, or selected to do. Instead of doing their job they are trying to tell people how to do their jobs or lead their lives.

It is high time that all these jokers, get a life, and FIRST set an example from their lives, ( I know Cardinal goes in a simple car when he could be driving like the Mahanayakes in Benz cars or SUV’s) They should simply get their audience, to do better in their own lives, like live according to the objectives that each leader is supposed to emulate.

In case you are confused at this mixed message, each according to his own vocation. So the Cardinal must encourage his FLOCK to be more forgiving, more loving, be more community minded, live by example, and integrity, the best way to show others that the belief system is a positive one, which others may wish to emulate. This is NOT done by decree.

So to get back to basics, tuition classes evolved ONLY because the State Schools have reneged on their objective of teaching students, so that not only will they pass their exams, they will also graduate civic minded, well rounded citizens who can hold their own over all comers in society, and any field they wish to compete in.

It is time therefore that the BULLY PULPIT is used for that purpose, not to BAN this and that, but to encourage, coax, to assist, the growth and leadership potential of our nation to do better things. Good leader, beget good leaders, and bad leaders beget bad leaders, don’t forget that, and that is why we are in this mess as we have bad leaders in every sphere, be it as Chief of Police, as President or Prime Minister, as heads of ALL religious institutions, as top people in the Judiciary, Business, NGO, and other civic organizations, who are ALL more interested in what that position can give them till they conk off, rather than what they can do for the people they take responsibility to protect, burnish, encourage, and most of all empower to do good for a common cause.

Until that point, these arrogant so and so’s have to be put in their place, that they should not pontificate on matters outside of their realm, where people will only attend Sunday mass if they feel they can get some meaning from it, not be forced!
Posted by Patta Pal at 12:46 PM 2 comments: